We woke up early in Tijuana, knowing that the border crossing into the U.S. would be a long, painful wait. We set out from Hotel Ticuan, got in line about a mile from the border, and prepared for a brutal, sweaty morning.
Thank god for Natalie's Triumph.

After fifteen minutes of going nowhere, a local in a car next to us said something in Spanish, and after we looked apologetically confused, followed up with perfect English.
"You don't have to sit in line, you know."
It turned out that he owned an old Triumph, and often rode it up into southern California. He explained that when he was on his motorcycle, he took a back route to the border that skipped most of the line, and that lane splitting was just fine in Mexico. Yeah, I know, this sounds like the setup for us to get mugged, but we were getting zero negative vibes from the guy; he just seemed like a fellow rider trying to help us out. We made sure we had his directions memorized, thanked him profusely, took off, and promptly got lost.
What followed was a ten minute freeway ride to the West along the U.S. border fence, a seriously grim structure. We turned around, came back into town, and with some frantic back-and-forth on the headsets, managed to find the right road the second time around. We rode up the lane he told us to use, and then slid past the empty police checkpoint booth he said might or might not be staffed. At that point we found ourselves a half mile from the border in what appeared to be a pedestrian walkway. We sat there for a second, trying to decide what to do, when a lady on foot looked over her shoulder at us and motioned for us to come on through. Okay, I guess it's for pedestrians... and motorcycles. We eased forward in first gear, and continued riding past rolling drink carts, windshield-wiper vendors, and little kids running around. It felt like there was the border, and then there was the "backstage" area full of locals heading out on stage to peddle their wares to the line of cars. We were the only U.S. license plates backstage.
Finally we came to a line of cars about a hundred yards long waiting for the border, which was now in sight. We once again came to a stop, and as we did I noticed a legless beggar on a little palette with castors on the bottom wheeling toward me. I got ready to give him the "no thank you" gesture, when I noticed that he wasn't begging, he was gesturing for us to keep easing up the side of the road. I thanked him as he rolled out of the way, and like an idiot didn't bother to fish out some change to pay for his advice. We rolled even farther up the even narrower sidewalk, until we finally cut back in line six cars from the border. Not bad at all!
Predictably, our luck was about to end. Apparently crossing the Canadian border and the Mexican border in the same week raises serious alarm bells someplace, because we both got pulled aside for further questioning. An hour later after standing around waiting for the drug-sniffer dogs to get off their lunch break, they drooled all over our stuff and we were cleared to go. We headed back into the U.S.A., made quick work of San Diego and soon cut East onto the Otega Highway. If I'm lucky there's some video of our ride through there that I'll post once we're back home, but to summarize, it's known as a prime destination for motorcycle riding for a reason.
Flash forward to the present: lounging around at the Vibe Hotel / Banana Bungalow, a backpacker's hostel on Hollywood Boulevard. We arrived to find a free BBQ and 80s music night going on, and after a hotdog and drinks, we finished the night by watching the beer pong game between some Australians and some European girls while dubstep music boomed from the DJ booth. The "party bus" shuttle showed up to take them all away to a local pub, and I ended up in a long philosophy discussion with Simon, the lone remaining Australian, while we sipped some leftover beers from the party. I think we may be staying in more hostels from now on...
The events of today reminded me very forcefully of an old adage: There are two types of people in this world, those who think that the world is a bad place full of bad people out to victimize them, and those who think that the world is generally a good place full of generally nice people just trying to get by. Appropriately, because of how those two types of people approach the world and interact with its residents, they are both right.
(Photo: Natalie enjoying dinner at the Vibe) 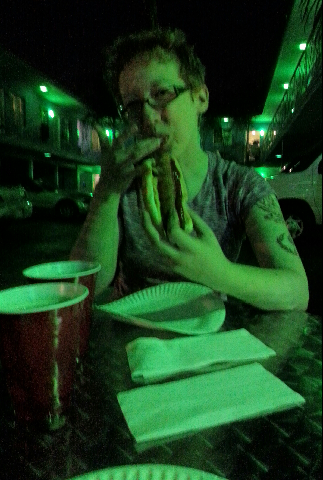